A literary work that seeks to honor the architect Alejandro Bustillo (1889-1982), whose work in Argentina was developed strongly between 1930 and 1950 (being adviser to the team of architecture and urbanism of the first Department of National Parks) and until the end of his life, leaving an indelible imprint on every landscape of our country and in the urban landscape of Buenos Aires. 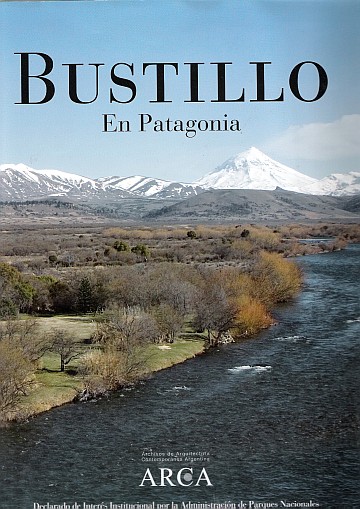 Most architectural works are in the cities of San Carlos de Bariloche and Villa La Angostura, but there are works in the rest of Patagonia and the federal capital. For this reason, the architect Martha Levisman, custody and curator of Bustillo Fund since 1982, decided to conduct a research to compile the imprint of Bustillo in Patagonia.

As a result she get this literary copy, which details Bustillos's work by work in Patagonia accompanied by descriptive stunning photographs. Through accessible language rid of as many technicalities, the author tells the story of National Parks and lists Bustillo architectural interventions in Patagonia. In addition, an excellent photographic documentation of Andrés Barragán and of the photographic archive complement the written information and helped the book to be declared of "institutional interest" by the National Parks Administration.

One of Levisman's goals is that the book serve to understand the architectural idea of ​​Bustillo without too much difficulty, so that it has helped of many images that bring the work to the general public. That is, not only to architects but to every individual culturally curious.

The book begins with an introduction on the history of the National Parks and the style defined by the same architects José Manuel Bustillo (grandson of Alexander Bustillo), Sonia Berjman and Martha Levisman. It then continues with a list of projects completed divided by national park, city and quality of the work (private or public).

Among the major works in Patagonia are to highlight the Hotel Llao Llao, the cathedral, the railway stations in Bariloche, the Messidor in La Angostura, the Antumalal Set with the tower on Lake Nahuel Huapi, which Bustillo has as residence in San Pedro Peninsula.

Another literary work on Bustillo

On the other hand, the author previously published another book ("Bustillo - 'A National Architecture Project'") which is a selection of all the work of Bustillo, which thanks to its versatility express the essential ideas of the decades 1920 and 1960. Both literary works are products of research that Levisman conducted with the personal file of Bustillo, who gave it to her 25 years ago.

Chubut's history Chubut is one of the most important Welsh colonies in the country. Its members came to this land long before the Spanish and Italians and established ties of solidarity with the local natives, the Indians tehuelches. Gaiman and Trevelin are the most strongly conserved Welsh traditions.
The italian and spanish inmigration in Chubut The province of Chubut was originally colonized by Welsh, but also, and like the rest of Patagonia, had a large influx of Spanish and Italian in the late nineteenth century.
The economy in the province of Chubut Chubut has one of the most important destinations in Patagonia: the Valdes Peninsula, that together with the mountanious offer builds its tourist industry. However, its economy is composed of a variety of activities: agricultural, industrial fishing, petroleum, livestock, forestry and various activities.
Short Patagonian history Short history of Patagonia. Old settlers, social relationships of domination and the formation of national territories that gave rise to the different provinces.
Neuquén: population growth and collective identity The identity of the inhabitants of Neuquén is rooted in history and is presented as an inevitable factor for the technicians who developed the Draft Neuquén 2020, who say: "greater identity to further globalization".
Two hundred years of the birth of Charles Darwin On February 12, 2009 it were completed 200 years after the birth of Charles Darwin, a researcher who traveled the world and spent many years in Patagonia, where he discovered and knew what would later help him formulate his theories.
Society, geography and economics Its geographical location, population and thriving economy based on industrial activity are some of the pillars of the province of Tierra del Fuego, the southernmost of the country and the world.
The Aboriginals and the first Europeans in the Patagonia Several attempts at colonization passed through the province of Tierra del Fuego, the youngest of our country. Its ancient inhabitants were the Onas and Yamana aborignals and centuries after the Spanish settled.
Fueguina Economy: Gas and oil Tierra del Fuego has a gas extraction plant that supplies LPG to the country and neighboring countries such as Chile and Brazil.
Tierra del Fuego: land of extremes Tierra del Fuego is a land of extremes because as well as being located in the "end of the world" and have little communication with the environment, the cold and rain in winter make the weather extreme also.
See all Articles