Five river and lake basins nestled in mountainous valleys west of the province of Chubut, are one of the most important areas in the world for sport fishing in its various forms, during the season that runs from mid November to April.

Equivalent to 40% of the lakes and watercourses located in the Patagonian Andes region, these basins are under proper conservation policies and guidance that make fly fishing an activity of pleasure guaranteed. 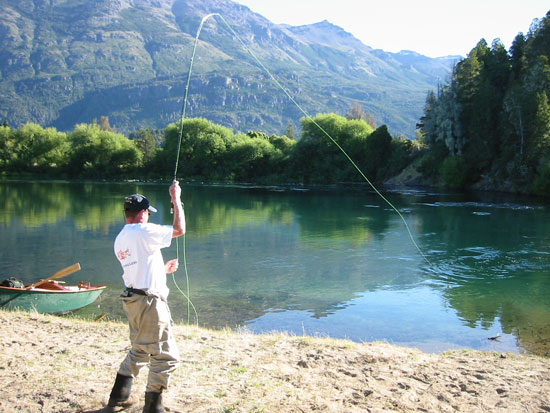 Despite this, the sport fishing provided in Chubut represent only 16% of total reported activity in the region, which shows the clear potential for development.

The province of Chubut has preferred fishing areas, listed in the list of fishing regulations. The Puelo, Futaleufu, Chubut, Corcovado, Pico and Senguerr river basins offer the fisherman the opportunity for varied fishing in salmonid species. Rainbow trout, brook trout, brown trout and creole Pacific salmon inhabit inland waters during the spawning time of each of the named species.

The politics of conservation and resource protection are adequate correlation with the presence of about 35 veterans fishing guides, grouped around the Fishing Guides Association of Chubut. Specializing in permanent contact with government agencies and their counterparts in the provinces of Patagonia, the fishing guides are making numerous initiatives that go far beyond simple fisherman's guide to the most effective for catching fish.

Moving in the philosophy of "capture with giving back the pieces", a practice that in the last ten years has gained adherents throughout the world, fly fishing or "fly casting" is now synonymous with conservation.

From passion to capture a legendary brand that goes beyond the issue of the ten kilos, today the sport fisherman knows that the essence of their hobby is the ability it gives you wonderful places to meet, spend unique moments in a wild and natural environment as that only a few people have the privilege of access and face an animal in its environment, beat in their own element and its best weapon: cunning. And let him live for another angler to enjoy so great experience.

It is around this philosophy that organizations like the Foundation Challhuaco (from the Mapuche language, "good fishing waters"), created by our own fishing guides in the mountains, develop activities to raise awareness about preserving the environment not only the lovers of sport fishing, but also the communities that live in the Andean environments impacting on them in greater or lesser extent. 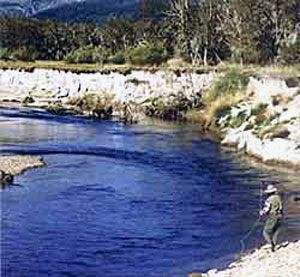 On the other hand, the power set of guides and official organizations in the Patagonian area, helped create a unified sport fishing regulations for the entire region, with special chapters for different environments, depending on the type allowed in each.

This regulation is updated every year and every season with changes in general tend to increase the type of fly fishing and catch with refund increasingly limiting the sacrifice of fishes.

However, this trend has only one direction whenever specialists from government agencies make exceptions depending on the evolution of fish fauna in different environments. So in recent seasons allowed the capture of trout smaller than the provisions of previous regulations, with an overabundance of young specimens and to the detriment of others who reached their adult stage.

For this reason, it is necessary to consult the fishing regulations permanent, something which is given to every fisherman when they pays their license. In fact, the stamp of the license must be attached to the same rules and this is what should be displayed whenever you are asked by one of the nearly twenty fishing guards that the province has dispersed in the different basins:

Recommendations: Patagonia is still free of the "disease of the tournament" scourge of the trout, Help us keep it that way. Take care with your equipment exposed to water, whether fished before in other environments outside of Patagonia. Take advice!

Corcovado river basin In Concorvado River Basin in Chubut province you can get different kinds of salmonids, including Pacific salmon that can reach 10 kg.
Fishing in Pico river basin: the river and its five famous lakes 1In Chubut River there is the Pico river basin that has a river of the same name and five lakes. There you can get various fish species with different modes of fishing.
Esquel region, Los Alerces National Park and Cholila In Chubut mountain range you can fish in the Esquel region and surroundings immersed in an amazing landscape in Los Alerces National Park also in Stange river and the lake Chico, among others.
Lake Tres and Senguerr river Lake Tres and Senguerr river are excellent options for sport fishing in Chubut.
Guidelines for recognizing species There are a variety of fish species that can be found in the mountains. They include brook trout, the brown trout, rainbow trout, landlocked salmon and perch.
Fishing in Río Negro Río Negro province has many places to practice sport fishing, both in the mountainous area around Bariloche and in the Negro River which flows into the Atlantic Ocean.
Sport Fishing in Tierra del Fuego 2More than ten rivers, four lakes and three lakes are the scene of sport fishing in Tierra del Fuego.
Fishing off the coast of Patagonia The Patagonian coast is extensive: more than 2,000 km of coastline. And there is no limit to the catch. In addition, you can choose between fishing from the coast and on a boat.
Salmonid species in the Patagonia A guide of salmonid species found in Patagonia. The clear, cool and oxygenated water from the headwaters in the high peaks secure the environment for their development.
All you need to know to fish in the region Fishing in Patagonia is to enjoy a spectacular, exotic and appealing scenary in addition to the thrill of taking fish of great size. The season runs from November to April each year.
See all Articles