Tierra del Fuego is considered internationally as a "if not the best" of the great places to catch trouts. To its sweet waters, especially rivers, anglers come from far across the world, willing to pay fortunes to spend some exciting days of fishing in the middle of nowhere.

They seek, in particular, engage in the midst of our winding rivers the legendary "sea trouts" of pink flesh and large size. These rare wild salmon, born inland, are those who have accessed the salt water and its tasty variety of foods, in the wide estuaries, where rivers enter the Atlantic and vice versa (it is said, there are areas where the tides "get" up to 35 kilometers up the river bed). And so, after feeding on the bounty of the sea, return or remain in their natural environment, but transformed into monsters desirable by anglers.

These coveted "sea trouts" reach easily reach a dozen kilos and even more, in some cases up to 18 kg, weights only reserved for salmon. The carotene that take of marine food resources gives their meat its characteristic pink or red color, for more excitement from their captors.

As in the northern rivers of Tierra del Fuego you can get large pieces, in the central lakes and rivers you can catch many, many, trouts in a single day. Nail, say ... twenty or thirty trouts from two to four kilos in a single day is perhaps a more attractive alternative for many fishermen than to pull out an only fish, thou it can be huge. Tierra del Fuego, by offering both options, is uniquely equipped to receive the more ambitious visitors, and it is able to satisfy them.

"There are no less than 300 kilometers of shoreline of rivers, and another 300 of coastal lakes and lagoons, to choose where to fish in Tierra del Fuego", ensures Tanguito (Victor Mejia), the most famous among sport fishing guides in this area (guiatanguito@topmail.com).

More than ten rivers, four lakes and three lagoons are the scene of sport fishing in Tierra del Fuego, but the high number of kilometers of coastline suitable for fishing gives a better idea of ​​the chances that occur in the region.

Of course, there are areas of the major rivers (a part of Menéndez river and most of the Grande river, which is about 100 km in total) that are bounded, i.e., that have restricted access, because they are private houses. In this sense, the information in order to fish in such places is difficult to obtain locally. These exclusive sites, which offer a complete and expensive service, aimed at well-defined markets for fishermen who usually reside overseas.

It is not the intention of those responsible for the private places to advertise their product nationally, much less, between the regional public. Even the guides who work there come from other parts of the world, the spread of what is offered in these pockets is usually done through international trade organizations whose clients are well identified and need not be raised through the mass media.

However, in Tierra del Fuego there are many good "fishing" as they call the favorite places for anglers to catch fish. Okay, then, to clarify that those who come to take trouts from an average of 2.5 to 4 kilos and are not intended, unless they are lucky, get a piece of more than 5 kg, should be directed to the area of ​​lakes and of rivers that flow into the lakes.

They can choose from the great lake Fagnano (mirror of water that is considered by its size, the second largest lake in Argentina and the fifth in South America), with its tributaries, the rivers Claro, Milna, Tuerto, Valdez, also Lake Escondido and other lakes, where you can easily take daily several trouts of 3 or 4 kilos.

Those, however, seek to catch larger pieces should point to the northern rivers of the island, in the area of ​​the department Río Grande, including Menéndez, Grande, Ewan, Chico, Fuego, Irigoyen, Bueno rivers, just to name the major. The two options are presented clearly, although there are factors that change the decisions of the visiting fisherman. 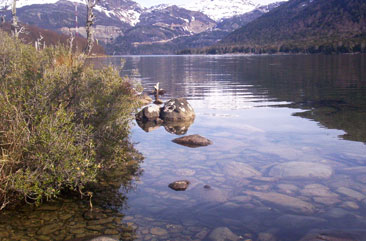 In the case of the fisheries services in the lakes, the guides, "fishing cowboys", as they attempt to catalog, offer much more than the accompaniment to the site from where you throw the line. In general, they pick up passengers by their hotel, transfer them to the site to be used as a base (an inn, a camp), ship them (if the chosen option is boat fishing in the lakes), prepare them and serve them meals and, if necessary, provide them camping equipment and even fishing, depending on the particular, which must be agreed in advance.

Somehow, one could say that the visiting fishermen have "guaranteed" fishing in Tierra del Fuego, in part by the abundance of the site conditions and also by the skill of the cowboys of fishing. If you hire such a service, the guide will exhaust all possibilities for the passenger to get a copy, because on that, first and foremost, depends on the success of the output.

"Everything else, whether it's food, wine, accommodation and the nature surrounding the site is secondary ... until the passenger is not concrete those for which he paid, which is to fish", reasons Ernesto Costa, a renowned local fishing guide who works for a decade-long in Lake Fagnano and adjacent rivers (flycast@satlink.com).

The fishermen camp or stay in shelters or hostels specially prepared on the banks. There are options, as it is spending several days in the exclusive Bay El Torito, located deep inside the Fagnano, using huts for overnight stays. But the possibilities, however the example above, are much more and may take place on the shore of the lake or in many others parts (especially if camping), thanks to the miles of shoreline available.

You can consult Turismo de Campo (info@turismodecampo.com.ar), an agency of Tierra del Fuego authorized to market such services.

Meanwhile, to access to fishing that is practiced within the private places and enjoy its benefits, there are different services. The service, which begins when visitors step off the plane and ends when it returns to get on it, back home, is often sold per week, not per day, which the amount can quickly reach three and even four zeros.

Around here, more and more flies

Until recently, most fishermen who visited Tierra del Fuego were spinning or "spoon" fishing enthusiasts. (The spoon is a red herring topped with metal hooks, as the angler picks up the line, it moves under the water and gives the feeling of being a fish alive or dying) 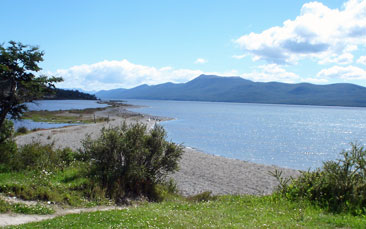 Now, however, there are many lovers of fly fishing, also known as fly-casting, an art that involves greater prior learning and, above all, a fine observation of the environment where you have to try fishing. (At the end of the line a lure that mimics an insect is tied and it flies or rests on the surface of the water, making it as realistic, natural as possible, so that the fish thinks it is food and swallow it) Arguably, increasingly, there is a preference for the latter mode, no more inaccessible than the other, although it involves more challenging sports and more involvement by the fisherman.

Its appeal, according to the guide Ernesto Costa, is in the "benefits the angler can give himself and, above all, those who decide to give the trout". On the other hand, it is a highly personal, nontransferable activity. It all depends on the observation of the environment that makes each one (to detect what the trouts are eating at the time and place), the correct choice of the fly to be used and sensitivity in handling the cane ...

In recent seasons it was also seen growth in the number of local fishermen who "change" to fly casting in Tierra del Fuego, through the courses of fly fishing sports that individuals and institutions of Río Grande and Ushuaia offer at end of winter and early spring.

Three varieties and many sites to choose from

Three varieties of trout dominate the fresh waters of Tierra del Fuego: brown, rainbow and brook trouts. However, there are sectors in which either one or other appear more frequently. Generally speaking, the browns have been being more abundant in recent seasons, as perceived by many regular anglers and guides who spend the entire season fishing.

However, it is necessary to clarify that, also according to these fishermen, it seem to have a very strong rule of territoriality among the three varieties, and where they are caught one type it does not usually come out copies of the other two. But you just have to move enough the place and conditions change. Overall, there are 300 river kilometers of coastline to choose from and as much lake shore!

On the other hand, over Irigoyen river (which flows into the sea, at the same latitude of the lake Fagnano) there is another private property, within the stay "María Luisa" with a daily quota of 9 rods. Finally, there is one more box in the lagoon Pescado, located in the farm "Don Matías", althoug it does not work commercially and are allowed up to 9 rods per day.

In general, it is recommended to be early in the corresponding gates, and it usually do not have much difficulty to enter between November and December. However, as of January begins the "high season" of the boxes, the income is complicated seriously until mid-March.

Both institutions have the concession for the sale of fishing permits, which in turn are distributed among the houses specialized in this activity and other businesses.

Fishing in Chubut Diversity of rivers and lakes make this province one of the most important areas of the world for sport fishing. All you need to know about the season and fishing areas.
Corcovado river basin In Concorvado River Basin in Chubut province you can get different kinds of salmonids, including Pacific salmon that can reach 10 kg.
Fishing in Pico river basin: the river and its five famous lakes 1In Chubut River there is the Pico river basin that has a river of the same name and five lakes. There you can get various fish species with different modes of fishing.
Esquel region, Los Alerces National Park and Cholila In Chubut mountain range you can fish in the Esquel region and surroundings immersed in an amazing landscape in Los Alerces National Park also in Stange river and the lake Chico, among others.
Lake Tres and Senguerr river Lake Tres and Senguerr river are excellent options for sport fishing in Chubut.
Guidelines for recognizing species There are a variety of fish species that can be found in the mountains. They include brook trout, the brown trout, rainbow trout, landlocked salmon and perch.
Fishing in Río Negro Río Negro province has many places to practice sport fishing, both in the mountainous area around Bariloche and in the Negro River which flows into the Atlantic Ocean.
Fishing off the coast of Patagonia The Patagonian coast is extensive: more than 2,000 km of coastline. And there is no limit to the catch. In addition, you can choose between fishing from the coast and on a boat.
Salmonid species in the Patagonia A guide of salmonid species found in Patagonia. The clear, cool and oxygenated water from the headwaters in the high peaks secure the environment for their development.
All you need to know to fish in the region Fishing in Patagonia is to enjoy a spectacular, exotic and appealing scenary in addition to the thrill of taking fish of great size. The season runs from November to April each year.
See all Articles