Salmonids in Patagonia are famous for their size. The clear, cold and oxygenated
waters from the headwaters in the high peaks secure the environment for their development. Salmonid species in Patagonia are exotic and were introduced in the beginning of the 20th century. There are also native species such as bass that are similar to sea bass, and silversides. These are less sought after by fishermen and are compulsory return.

In order to preserve the resource, most fishing destinations have set aquaculture establishments to "seed" these species permanently. In addition, each time in more fisheries, the return of the copies is required, allowing the development of the same in size. 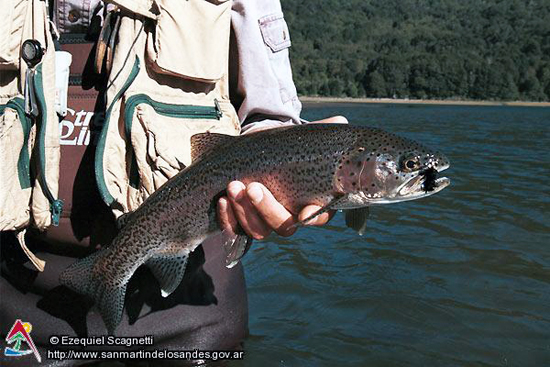 
We present you a simple guide for salmonid species.

Rainbow Trout (Oncorhynchus Mykiss): small head, elongated body, the color is the color is really gorgeous, with blue or green to the sides and a belly silvery white. In the middle of its sides it has a purple-red band and its whole body is dotted with dark spots.

Brook Trout (Salvelinus Fontinalis): of great beautiful, brown-green with light and red dots on his back and on top of the head, the belly is pinkish white. For the characteristic pink color of its flesh it deserved the name of "salmon trout" or "Salmon".

Brown Trout (Salmo Trutta): It is the most common of all trout. It comes from Europe and is the wildest of all as it aggressively defendes its territory. It is very stout and in all fishing seasons is the champion getting a record size. The largest trouts that are fished are from this species. Specimens have been obtained up to 14 kgs. Its golden brown color combination finishes in their abdominal region with a yellowish white. It has spots circle by a pale gray.

Silver Trout (Salmo Fario): For some reason not yet found a few specimens of brown trout leave the rivers to adapt and live in the ocean taking marine features. Their weight exceeds 10 kg. and they take a silvery color characteristic of marine fish, for spawning they return to rivers. Because of their adaptability to both media is regarded as Native Trout.

Locked Salmon (Salmo Salar Sebago): It is silver on the back and blue on the head, it has black spots on the flanks, dark dorsal fins and jaws and belly creamy.

Fishing in Chubut Diversity of rivers and lakes make this province one of the most important areas of the world for sport fishing. All you need to know about the season and fishing areas.
Corcovado river basin In Concorvado River Basin in Chubut province you can get different kinds of salmonids, including Pacific salmon that can reach 10 kg.
Fishing in Pico river basin: the river and its five famous lakes 1In Chubut River there is the Pico river basin that has a river of the same name and five lakes. There you can get various fish species with different modes of fishing.
Esquel region, Los Alerces National Park and Cholila In Chubut mountain range you can fish in the Esquel region and surroundings immersed in an amazing landscape in Los Alerces National Park also in Stange river and the lake Chico, among others.
Lake Tres and Senguerr river Lake Tres and Senguerr river are excellent options for sport fishing in Chubut.
Guidelines for recognizing species There are a variety of fish species that can be found in the mountains. They include brook trout, the brown trout, rainbow trout, landlocked salmon and perch.
Fishing in Río Negro Río Negro province has many places to practice sport fishing, both in the mountainous area around Bariloche and in the Negro River which flows into the Atlantic Ocean.
Sport Fishing in Tierra del Fuego 2More than ten rivers, four lakes and three lakes are the scene of sport fishing in Tierra del Fuego.
Fishing off the coast of Patagonia The Patagonian coast is extensive: more than 2,000 km of coastline. And there is no limit to the catch. In addition, you can choose between fishing from the coast and on a boat.
All you need to know to fish in the region Fishing in Patagonia is to enjoy a spectacular, exotic and appealing scenary in addition to the thrill of taking fish of great size. The season runs from November to April each year.
See all Articles