Thousands of notes, TV shows and comments have been posted on fishing in Patagonia. Who has not heard of fly fishing, of the Chimehuin, of lake Nahuel Huapi? Who has not seen a picture with the cutout of a man in a lake with water up to his knees and the mountains lying behind? Who does not have an acquaintance who has not gone in excursion to a river of the region? or has not seen a travel agency that offers a travel package for fans of the sport?

Apart from the obvious: spectacular, exotic and appealing scenary representing Patagonia to visitors from around the world, there's more. In this region there are large-sized fish. Salmons have come to get the size of a shark, and it is not an exaggeration, so famous among fishermen, no. There are pictures that witness it. In addition, species are harder, they say. That is, they fight more. And that pleases the passionate fisherman.

And to enjoy these features there are places to choose from: from the north, in the province of Neuquén, with its countless suitable rivers and lakes, to the south in Río Grande, where foreigners come to pay thousands of dollars for a personalized guided tour to the most important fisherie in the area. Not to mention the endless Atlantic Ocean that bathes the east of Patagonia. 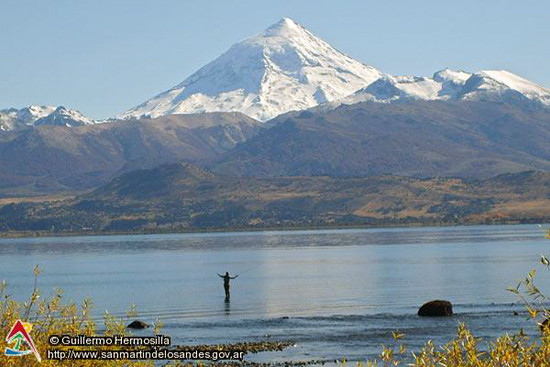 Fishing in Lake Huechulafquen with Lanin volcano in the background. Photo courtesy of www.sanmartindelosandes.gov.ar


To fish you can use the mode of Spinning (with spoon, from the coast), Fly Casting (with fly) or Shipped.

It goes without saying that those who arrive, they are not just the fans. Anyone who is looking for an outdoor activity, try throwing a beer once in the middle of a river or lake and wait (if you have patience and luck) that a fish is hooked on the hook. Because that moment of tranquility and peace with nature that you feel when you're waiting, while listening to the sound of birds or having time to admire the surrounding environment, is unforgettable. Not to mention, when the cane strips and the chop signal so desired appears.

And as it has already said, it is not unusual to find an American or a European walking the paths that lead to the most important fisheries. Patagonia is famous throughout the world and travel agencies from everywhere organize (you know that successfully) trips to come here. Programs are exclusive, with guarantee capture, through which they come to pay thousands of dollars just for the tour to that place of safe fishing.

It is that the places where they fish, it is "top secret" information, as say the fans: they all want to boast of their catch and be the only ones to get them.

Before concluding this general glimpse of what it means fishing in Patagonia two very important facts: the season starts in November each year and ends in April next, and to fish you need a permit. The same is pending in national parks, provincial or authorized fishing houses, and there are differential values ​​for non-residents and minors.

Sport fishing is nice and the provinces get a lot of economic rent for it, through permits and the money that drives tourism in hotels, restaurants, etc. But it is clear that it should no longer be sport or alter the local ecology. Therefore, in winter, when the fish reproduce, their capture is prohibited. And the cap on fisherman (usually two sacks per person, and in some rivers compulsory return) is demanlly control.

Anyway, to know well where to fish, how much depending the place, and what the special restrictions are, you just need to read the fishing regulations. Note: If any fishery is not listed there, it is because that fishing is prohibited on that site.

Fishing in Chubut Diversity of rivers and lakes make this province one of the most important areas of the world for sport fishing. All you need to know about the season and fishing areas.
Corcovado river basin In Concorvado River Basin in Chubut province you can get different kinds of salmonids, including Pacific salmon that can reach 10 kg.
Fishing in Pico river basin: the river and its five famous lakes 1In Chubut River there is the Pico river basin that has a river of the same name and five lakes. There you can get various fish species with different modes of fishing.
Esquel region, Los Alerces National Park and Cholila In Chubut mountain range you can fish in the Esquel region and surroundings immersed in an amazing landscape in Los Alerces National Park also in Stange river and the lake Chico, among others.
Lake Tres and Senguerr river Lake Tres and Senguerr river are excellent options for sport fishing in Chubut.
Guidelines for recognizing species There are a variety of fish species that can be found in the mountains. They include brook trout, the brown trout, rainbow trout, landlocked salmon and perch.
Fishing in Río Negro Río Negro province has many places to practice sport fishing, both in the mountainous area around Bariloche and in the Negro River which flows into the Atlantic Ocean.
Sport Fishing in Tierra del Fuego 2More than ten rivers, four lakes and three lakes are the scene of sport fishing in Tierra del Fuego.
Fishing off the coast of Patagonia The Patagonian coast is extensive: more than 2,000 km of coastline. And there is no limit to the catch. In addition, you can choose between fishing from the coast and on a boat.
Salmonid species in the Patagonia A guide of salmonid species found in Patagonia. The clear, cool and oxygenated water from the headwaters in the high peaks secure the environment for their development.
See all Articles